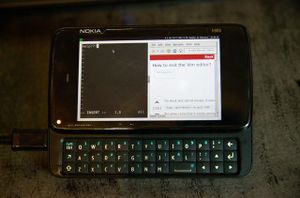 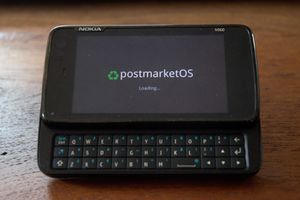 Cameras are supported in the kernel, but have very complex media pipelines. Megapixels has preliminary support for at least the rear/main camera.

The GPU is a PowerVR SGX530 which does not have FOSS drivers, so there is no 3D acceleration. However, the required blobs and patched mesa have been merged into pmaports, so this should soon be usable.

Voice calls work, but need https://gitlab.com/libcmtspeechdata/libcmtspeechdata to route the speech data. Due to very tight timings involved in the associated protocol, the audio is very low quality unless additional processing is performed (Nokia had closed-source Pulseaudio modules for this).

There's bluetooth support at bluetooth-next, but that works on N950, not on N900. Bluetooth . The driver compiles fine, but fails on loading the firmware.

OTG might work since the kernel has support. However, like Wileyfox_Swift_(wileyfox-crackling), there is a hardware limitation that prevents the N900 from automatically detecting that there's a connected device, and also detecting the USB version/speed it supports. With some work, it most likely should work with manual activation

We currently only support installing and running pmOS from the microSD card on the N900. Getting it to work with eMMC and 0xffff is harder to implement and has no real benefit since the built-in eMMC is quite slow and fragile.

Official images of postmarketOS for the N900 are built at least every week. Download an image from the branch you want to use:

Then flash it to your SD as follows. Adjust the image name and the path to your SD card (you can figure it out with lsblk).

The first boot takes longer, as the root partition gets resized to fit the whole SD card. There is a lot of kernel output during boot, just wait patiently until i3wm shows up. Read #i3wm for the N900 specific keybindings, most importantly Shift + Space, then t to open a terminal. Use sudo nmtui to connect to a Wi-Fi network.

Instead of the pre-built images, you can use pmbootstrap to generate your own image. It allows to use full disk encryption, use another user interface (e.g. XFCE4) and other customizations.

2. Start the build process and install the completed image to a sdcard

(Replace /dev/sdX with the device for your sdcard)

Configure u-boot on eMMC to boot from the SD card

In order to configure pmos to boot by default on the N900, using U-boot, you will need to boot into Maemo and create a /etc/bootmenu.d/10-pmos.item file as the root user with these contents:

It can be set to the default boot option by creating a symlink:

Note: This will set pmos as the default boot option. Maemo will still be accessible when booting the N900 with the keyboard slide out and selecting the relevant boot option in the u-boot boot menu.

The device-nokia-n900-nonfree-firmware package is required to provide the wl1251 firmware necessary for initializing the wifi device. (#1414) You get asked during pmbootstrap init if you would like to install that proprietary firmware package.

Now you can use NetworkManager's console UI to connect to your network. Please note that nmtui does not work properly when started from tmux.

WiFi settings do not work across reboots

The MAC address of the N900 WiFi interface its being randomized at every boot, since the connection profile created with nmtui is bound to the MAC address, it won't work at the next boot.

To solve this, after connecting you can use nmtui to edit the created profile, and remove the MAC address from the "Device" section

If NetworkManager should not work for you, make sure that it is not running and run the following commands to connect to an encrypted network manually:

It should be possible to disable power saving for better ping times, see maemo-leste#172.

Modules need not to be compiled, sound support is built into kernel. Install alsa-utils.

There are 6 keyboard backlight LEDs that can be adjusted, they are found under /sys/class/leds/lp5523:kb{1-6}. To adjust brightness, write a value, $VAL between 0 and 255, to the brightness parameter as the root user:

The keyboard layout is asked during pmbootstrap init after you select the nokia-n900 device.

To obtain your desired language keymap file for the RX-51, such as this one:

(TODO: Need to pull 'official' vconsole keymaps from Maemo5 if they exist..)

NOTE: during installation pmbootstrap will typically ask you for the desired X11 xkb keymap. The following is only for experimentation: normally all should just work fine after setting up the SD card from pmbootstrap. The following section may be dated and pmbootstrap has already done the job for you.

In X11 you can use setxkbmap to configure the desired layout.

Right now it's configured to use the nokiarx51/us layout by default (see 40-xkb.conf) then the pmbootstrap script will patch this file to set the Option "XkbLayout" to "nn" where "nn" is your country code.

You can use the

blue arrow key in combination with the Volume Up/Down to switch to a different virtual terminal.

If you installed postmarketOS with a UI, you first have to enable again the other VT by editing the /etc/inittab file and uncomment the following lines:

With DRM enabled (pmbootstrap!197), the display can be managed at this location: /sys/devices/platform/omapdrm.0/graphics/fb0/

For example, the display can be turned off by:

I3wm is the recommended UI. It is lightweight and fast, and we have a custom N900 configuration that optimizes for its keyboard (photos). The most important keybindings are described below, for details see i3wm.conf. This file gets installed to ~/.config/i3/config and of course you can customize it. If you have good additions, please make a merge request so everybody benefits from an improved default config.

Xfce4 does not have performance issues, but since this UI is not optimized for keyboard only usage or for touch screen usage, it is not as user-friendly as i3wm with the postmarketOS default config.

There are also Mate, etc.

If you want to make use of the power button, bind XF86PowerOff to this script:

Obviously, you can't middle click with a touchscreen, but this can be annoying when it's one of the few ways to paste in the terminal. This script simulates a middle click:

For simulating right click button you can use this command:

You can bind it to any key you wish. XF86WebCam is a good choice since it's fairly easy to reach and isn't used for anything.

Battery charging is fully supported by the kernel and does not need any special configuration.

The current battery capacity can be found under /sys/class/power_supply/bq27200-0/capacity, and is represented as a percentage. For example, a value of 11 equates to 11%. If capacity does not exist or contains erroneous information, then your battery needs to be calibrated. To calibrate the battery:

1) Charge it up fully, using a wall power adapter.

2) Unplug the device and allow the battery to run all the way down until it powers off. This may take quite a while to happen (>24hrs, but can be made shorter by running a CPU intensive workload). Do not let it charge at all during this time. This means you may not use USB for example, as this automatically causes the device to start charging, albeit slowly.

3) When device eventually powers off, the battery charge gauge chip should then be calibrated. You may charge it up again to use the device.

Datasheet for the bq24150 charging chip

Currently, when battery gets below suitable operating voltage, the device dies. This is bad for the battery and the file system. Here is a script that monitors the battery, and powers the device off before the battery reaches critical state. For suggested usage, read the program's comments.

Realtime clock at /dev/rtc0 is on the twl4030 (PMU), and allows setting an alarm to wake the device from sleep, poweroff states.

In order to use the ofono test scripts, you must install py-dbus, that is currently available only for python2.

Here's an example using the test scripts to enable the modem and send a SMS:

The Mass Storage class exposes a block device as a flash drive on your host machine.

For example, to use the "MyDocs" partition as Mass Storage Device, make sure you unmount the partition first (if mounted), then execute:

If you only need read permissions on the partition, you can set the read-only flag before exporting it:

GPRS can be managed by connman. Either install connman using apk or add it when installing pmOS by passing --add connman to pmbootstrap.

It's VERY important that you add the following to /etc/connman/main.conf BEFORE starting connman, else it will take over all network connection handling and disconnect you if you are connected over SSH:

Configure connman to start at boot:

Edit APN, where <IMSI> should be replaced in the following commands with the IMSI from your SIM card. Replace <APN> with the relevant APN for your cellular carrier (e.g. fast.t-mobile.com). This file should be created when ofono starts, so you should only need to add the APN.

Start ofono and power on modem.

In some cases, it seems necessary to run a scan before the necessary service will show in connman, even though the scan is 'unsupported':

Connect to the cellular service:

First, get network and date to work. Next, clone tui repository. it contains includes many goodies, including script for hardware testing, gps support, and graphical ofono control software.

Next, install packages necessary for compiling software and prepare gps2. enable-modem, online-modem and you should be able to run gps2. AGPS is not available, so expect long startup.

The N900 contains an Si4713 FM transmitter, it's controlled by video4linux. To start transmitting: