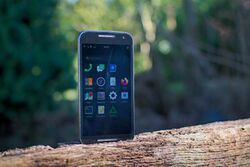 Import contacts from a .vcf file

To import a .vcf file, open the "Contacts" app, click on the menu icon in the top right corner, and select "Import". A window will pop up allowing you to select your .vcf file. Once selected, click "Confirm" in the confirmation popup that shows up.

Tinydm in turn will launch Phosh by looking into the file /var/lib/tinydm/default-session.desktop which contains an Exec directive executing dbus-run-session /usr/bin/phosh which in turn will produce the passcode screen so you can proceed to log into your phone.