From postmarketOS
(Redirected from LuneOS)
Jump to navigation Jump to search 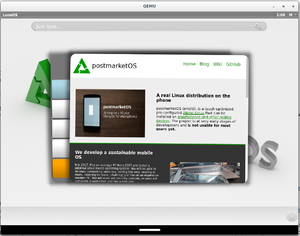 We were able to present an initial version in December of 2017. But after that, LuneOS was unmaintained and didn't build anymore (pmaports#49). The packages have been removed from postmarketOS. If you are interested in making it work again and maintaining the packages, here are the old build recipies for reference.

All information above is outdated.

It's sad that we can't maintain this right now and had to remove it. But nevertheless, some of the efforts lived on, because ncopa from Alpine Linux could use some of the musl related qt5-qtwebengine patches that magmastonealex created to make LuneOS UI work on postmarketOS. And who knows, we could be able to support this UI again in the future if someone steps up to maintain it.

Choosing luna in the UI selection in pmbootstrap init is not enough to make it start right now!

See also The Github issue for more instructions and ideas for getting this running on non-accelerated phones.

Complete the steps, when you get to the black screen, click where the "next" button should be. It's not clear what causes that yet.

Once the app exits and you're presented with the home screen, run luna-send -n 1 'luna://com.palm.configurator/run' '{"types":["dbkinds","dbpermissions","activities"]}' in another terminal. Stop luna, reboot, and start luna again, and everything should be usable.