Devices with this chipset

This chipset is used similarly in the following devices:

Other devices using this chipset but not yet ported to postmarketOS (remove once they are ported): 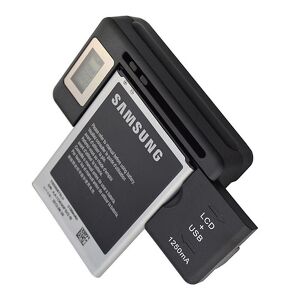 Samsung universal charger of a type that can charge the Li-Ion batteries for all U8500 mobile phones.

The U8500 has a companion power management IC (PMIC, also known as analog baseband, AB) ASIC called AB8500/AB8505 that takes care of the charging. In difference from many other charging ICs this chip is not autonoumous and will not charge the phone without the right software to instruct it, respond to interrupts etc. So in short: the phone will not charge unless the kernel has started and provides the right driver for the charger portions of the AB8500.

The mainline kernel for the U8500 supports battery charging as of v5.18-rc1.

To work with these phones an extra battery and an external battery charger can be helpful: if your battery depletes completely before you recharge it you have a problem.

This type of charger at Wish can charge all of these batteries. It is a noname product simply named "Multi-connector USB Battery charger" that originates in China and often found in webstores such as Aliexpress or Wish. The charger comes with a US plug, so you may additionally need a US-to-european power converter to use it.

Suspend-to-RAM works and can be tested by:

The system will become uninteractive until woken up by some event such as touchscreen, buttons etc. (If any of these do not wake up the system each driver and config needs to be augmented such that it will.) If nothing else works the power button will generate a wake-up event.

The U8500 platform is speed-controlled by the embedded PRCMU (Power Reset Clock Management Unit) firmware. The speed of the stock U8500 is 998.4 MHz (~1GHz) while the Samsung Galaxy Ace 2 (samsung-codina) has a speed cap that limits that specific phone to the next highest operating point at ~800MHz.

It is possible to bypass and overclock the SoC. In 2014 an XDA developer named Huang Ji ("cocafe") made a patch adding LiveOPP, i.e. taking direct control over the operating points by bypassing the firmware. He added several new frequency steps and enabled overclocking the SoC all the way up to 1.25GHz.

As stated here, getting Audio work requires more work. linusw made some not yet working experiments.

The modem used in the U8500 SoC was developed by Nokia. In 2010 Nokia sold their wireless modem division to Renesas, who since has developed and supported this modem.

The vendor main source code for the modem interface can be found here. The vendor kernel also contains the driver in drivers/net/u8500_shrm.c (shared memory) and include/linux/modem/*.

The U8500 DTS has the reserved memory areas for the modem defined: private, shared and trace memory.

The U8500 then uses Phonet to talk to the modem, so the userspace stack should be similar to what the Nokia n900 is using so one can draw inspiration from there. IP will probably work out-of-the-box with Phonet but maybe some AT commands from userspace are needed too.

Audio phonecalls will require a special quirk to the audio driver once it is working (for very low latency) but should be doable as well.

These are the known existing Samsung U8500 models in release order.

The GPL code drops for various U8500 devices can be found on the branches in this git tree:

Flash and SDcard Layout on Samsung NovaThor U8500 Devices

When working with these devices, we install U-Boot, the kernel (zImage) and a small initial ramdisk (initrd) in the internal flash of the phone. The installation is done in three steps:

U-Boot on Samsung NovaThor U8500 Devices

There is a port of (mainline) U-Boot for U8500 currently maintained at: https://github.com/stericsson-mainline/u-boot

It contains a board called stemmy, which is intended for all Samsung devices using U8500 (see above). It provides a simple Android fastboot interface as replacement for Samsung's proprietary flashing procedure. As a device tree compatible bootloader, it can be also used to boot mainline without any hacks in the Linux kernel.

Heimdall can be found here but is packaged into most major Linux distributions such as Debian, Ubuntu and Fedora.

Pre-built U-boot images are available from: https://github.com/novathor-mainline/u-boot/releases. Alternatively, you can build it from source. See #Building below.

To get into "custom OS install" hold volume down and home key down and press power on. The phone will vibrate and issue a warning ("A custom OS can cause critical problems...") if you are OK with this risk, press volume up to continue. When the phone shows the Android robot and says Downloading... you can use Heimdall to download U-Boot.

Install it normally to the boot partition replacing the default Kernel (notice capital K on Kernel):

If this doesn't work, especially if you have messages in the console such as "Android recovery image size=322449, ramdisk size=0" then the phone is not booting from the Kernel partition but from Kernel2 so try this instead:

U-Boot will try to boot an Android boot image from the boot partition by default. Pressing one of the volume keys during boot allows to change that behavior:

U-Boot itself can be also flashed from U-Boot using fastboot flash u-boot u-boot.img (in this case, it will not apply the offset for the boot partition).

Kernel Hacking on NovaThor U8500

These sections detail some tricks needed when working on kernel development.

Some details can be found at the external page for [Ux500 mainline work].

When used with PostmarketOS the boot.img that you flash into the phone should come out of the pmbootstrap utility, but if you for some reason want to assemble the boot.img using some prefabricated kernel, ramdisk and device tree, the process is like this this:

Notice how this puts the device tree binary foo.dtb into the "second bootloader firmware".

If you are booting PostmarkeOS with a custom kernel, the initrd you pass must better be a PostmarkeOS initramfs. This can be found in a path like .local/var/pmbootstrap/chroot_native/mnt/rootfs_samsung-skomer/boot/initramfs-postmarketos-stericsson. The initrd is used to set up, detect and load the rest of the rootfs from the SDcard volume so it is pretty vital.

You install a custom kernel into the device by booting into U-Boot as described above, go to fastboot mode by holding down Power + Volume Down or by holding Volume Down while you insert the serial cable. Then you can flash a new kernel image like this:

After this reboot the phone and your new kernel should start.