So far, what works for Samsung Galaxy S III LTE (samsung-m3) also works for the samsung-m0 (Galaxy S III international GSM version without LTE, Also known as Galaxy S III 3G SHW-M440S in South Korea) and samsung-shv-e210s (a Korean variant). (None of these S III models should be confused with the North American S III models, which require OS builds.)

Step 1: Flash the system to an SD card

Start by flashing postmarketOS onto an SD card. You can get prebuilt Edge images for samsung-m0 here: https://images.postmarketos.org/bpo/edge/samsung-m0. At the moment, only Phosh is available as Plasma Mobile does not work on samsung-m0 for now, and Sxmo lacks configuration for samsung-m0.

On the download page, there will be two images presented after you select your UI. Flash the one without -boot at the end to your SD card using your favourite flashing tool. A nice cross-platform tool is Fedora Media Writer, but you can use whatever you want. Note that some flashing tools may require you to decompress the image before flashing (Fedora Media Writer decompresses the image for you). When the image is flashed to the SD card, unmount the SD card if it automatically mounted after flashing, then remove the SD card from your PC, and finally insert it into your phone and continue to the next step.

Now, use Heimdall to flash the image with -boot at the end to your boot partition. Make sure that you extract it before flashing it (the downloaded file is a compressed .tar.xz archive).

Flash it with this command:

Note that it's important to write BOOT in all capitalised letters, as otherwise you will get an error about the partition not being found in the PIT.

After that's done, your device should now automatically reboot into postmarketOS!

If WiFi networks show up but you can't connect to them, you can try using the nvram for samsung-m3/i9305. This is a hack and not necessarily endorsed, but at least one user has reported that their samsung-m0/i9300 needs this for WiFi to work. We would like to handle this better, but currently we don't have any way of doing this.

To switch to the nvram meant for samsung-m3, run this command:

If it still refuses to connect, you might want to try replacing the contents of /lib/firmware/bcrm/brcmfmac4334-sdio.samsung,i9300.txt with the nvram from LineageOS. Apparently this is necessary on some British i9300 models. 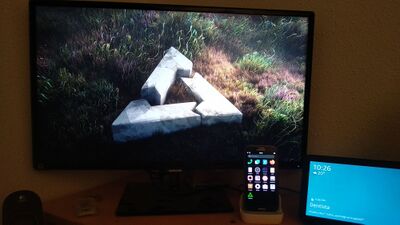 Video out should work as long as you use an original Samsung dock/adapter from the time period. Samsung's EDD-S20EWE is known to work. At least some third-party ones have been confirmed to not work.

In 2022-09, this was disabled (pmaports!3395) as the kernel driver reports the wrong state, and this leads to the Phosh stack not starting up. If you do have this hardware and would like to fix it in the kernel, please reach out.

The modem does not work in postmarketOS. That said, there was some work done to enable the modem on the i9300 variant of this device. It can be found here: https://github.com/fourkbomb/linux/tree/modem. Note that even if you apply this, you would likely need userspace patches as well for calls and mobile data to be usable.

Audio mostly works. Notable omissions are input from the main microphone and headset audio out.

The kernel package for this device in postmarketOS is linux-postmarketos-exynos4PMOS. In pmaports repo, including a list of patches. The most important patch is the "flush TLB" one - it allows the kernel to be booted by devices using the stock Samsung bootloader.

A large part of the mainlining process was done by forkbomb; see Midas on Mainline.

The Replicant project also provides good mainline support for the Galaxy S III; they have expressed intent to collaborate with us. Their support matrix can be found on their wiki. Relevant links:

Replicant supports the modem on mainline Linux, and they're working on getting the i9300 modem working with a mainline kernel in a way that pmOS can also utilize: https://redmine.replicant.us/issues/1954 https://git.replicant.us/contrib/GNUtoo/kernel_replicant_linux/log/?h=replicant-11-i9300-modem

LTE modem support with the mainline kernel on Replicant is being done here: https://redmine.replicant.us/issues/2206 The Note II discussed here has the same or very similar modem as the i9305.

It used to be that the battery percentage wasn't properly monitored and would get stuck at a set percentage at boot. While this was the case, the phone would not shut down when battery levels went too low, which could make the phone behave strangely on significantly worn batteries (in the ballpark of 50% wear). There are theories that this may have caused hardware failure for one user, but this is not proven. Battery level reporting has since been fixed, but it has not been extensively tested for reliability, so we recommend that you try to not let your phone's battery percentage fall too low. It should shut down on its own before anything adverse can happen, however.

Replicant has a good article about this: https://redmine.replicant.us/projects/replicant/wiki/EMMCFirmwareBugs

Heimdall does not consider partition sizes when flashing